US Economy Shrinks for a Second Quarter, Fueling Recession Fears

The drumbeat of recession grew louder after the US economy shrank for a second straight quarter, as decades-high inflation undercut consumer spending and Federal Reserve interest-rate hikes stymied businesses and housing.

Gross domestic product fell at a 0.9% annualized rate after a 1.6% decline in the first three months of the year, the Commerce Department’s preliminary estimate showed Thursday. Personal consumption, the biggest part of the economy, rose at a 1% pace, a deceleration from the prior period. 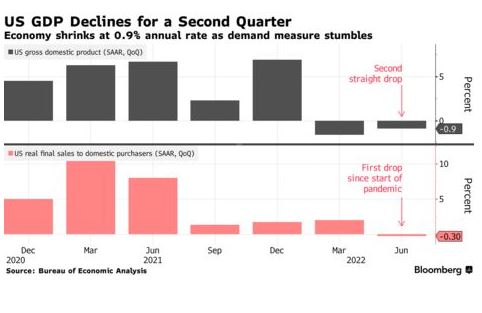 “The more important point is that the economy has quickly lost steam in the face of four-decade high inflation, rapidly rising borrowing costs, and a general tightening in financial conditions,” Sal Guatieri, senior economist at BMO Capital Markets, said in a note. “The economy is highly vulnerable to slipping into a recession.”

The report will add to political headaches for President Joe Biden and complicate the Fed’s calculus over how aggressively to raise interest rates.

In addition to the slowdown in household spending, the report also showed declines in business investment, government outlays and housing. Inventories also weighed on GDP, while a narrower trade deficit added to the figure.

A key gauge of underlying demand that strips out the trade and inventories components — inflation-adjusted final sales to domestic purchasers — fell at a 0.3% pace in the second quarter compared with a 2% gain in the prior period.

The report illustrates how inflation has undercut Americans’ purchasing power and tighter Fed monetary policy has weakened interest rate-sensitive sectors such as housing. That is likely to throw fuel on an already heated debate about if or when the US enters a recession.

While the common rule of thumb for recessions is two consecutive quarterly declines in GDP, the official determination of ends and beginnings of business cycles is made by a group of academics at the National Bureau of Economic Research.

“The contraction in second-quarter GDP significantly raises the risk that the economy will fall into recession by year-end…lagging momentum leaves the economy vulnerable to further adverse shocks such as a potential energy crisis in Europe or intensified supply strains in the second half of the year.”

The median projection in a Bloomberg survey of economists called for a 0.4% advance in GDP and a 1.2% rise in consumer spending. Two-year Treasury yields tumbled after the report potentially reduced chances of further aggressive Fed rate increases, while the S&P 500 opened higher and the dollar fell.